What If the Cuban Missile Crisis Went Hot?

A Similar Scenario Could Play Out in The South China Sea 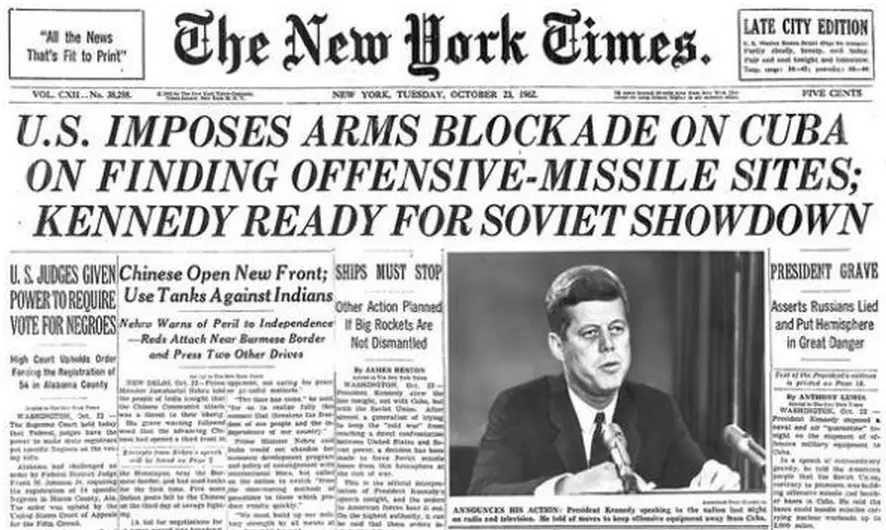 In 1962, during the Cuban Missile Crisis the world came the closest in human history to a nuclear war. There are useful lessons from this Cold War period, when nuclear missiles were being transported on Soviet ships to support Fidel Castro's Cuban revolution, that aren’t being applied to relevant situations in the world right now. During those 13+ days beginning on 27 October 1962 when the U.S. became aware of the presence in Cuba of Soviet missiles that could strike any city in America:

This conflict was resolved when Attorney General Robert Kennedy passed a message from his brother - President John F. Kennedy - to the Russian Ambassador in the U.S., a response to a previous letter sent by Russian Premier Nikita Khrushchev. Because of the lack of secure communications at the time, the Russian ambassador had to transmit this World War III-preventing message back to the Kremlin via Western Union – the most popular way in the ‘60s to send a telegram around the world.

A seventeen-year-old employee of Western Union picked up the message which required a response within twenty-four hours - from the Russian embassy on his bicycle and pedaled it to the Western Union DC office for transmission to Moscow. Kennedy found out Khrushchev’s response over a radio broadcast in Western Europe.

One of the lessons of the Cuban Missile Crisis is that leadership matters.

Why did the Cuban Missile Crisis happen? It was a result of a number of factors, both internal and external to each country. The Soviet Union was in the midst of a nuclear arms race with the United States, and they saw the placement of missiles in Cuba as a way to close the gap. Additionally, the Soviets were facing political instability at home, and they saw the resulting conflict over the island nation as an opportunity to project strength on the world stage. The U.S. was concerned about the placement of Soviet missiles so close to their borders. We saw it as a direct challenge to our authority in the Western Hemisphere. In short, a combination of geopolitical tensions and domestic concerns led to the Cuban Missile Crisis.

What is mind-blowing to me is how three countries were making decisions that could have led to the destruction of life on Earth based on very imperfect information and a significant misunderstanding of the information that they did have. For instance:

But the two craziest things for me are:

One of the lessons of the Cuban Missile Crisis is that leadership matters. Calm and cool leaders possessing integrity, who are unafraid of suffering the consequences that often come with doing the right thing, could be the only thing that separates us from Armageddon and peace.

In mid-October 2021, the Minister of Defense for Taiwan said the Chinese military would be able to easily invade and control Taiwan within four years

Another lesson is that countries need to make their foreign policy intentions clear to prevent misconceptions by allies or adversaries. Unfortunately, today, on this latter point the United States and U.S. allies are doing a poor job when it comes to another island nation, one which could be the tinderbox which once again threatens to ignite a hot war between two nuclear powers – Taiwan. 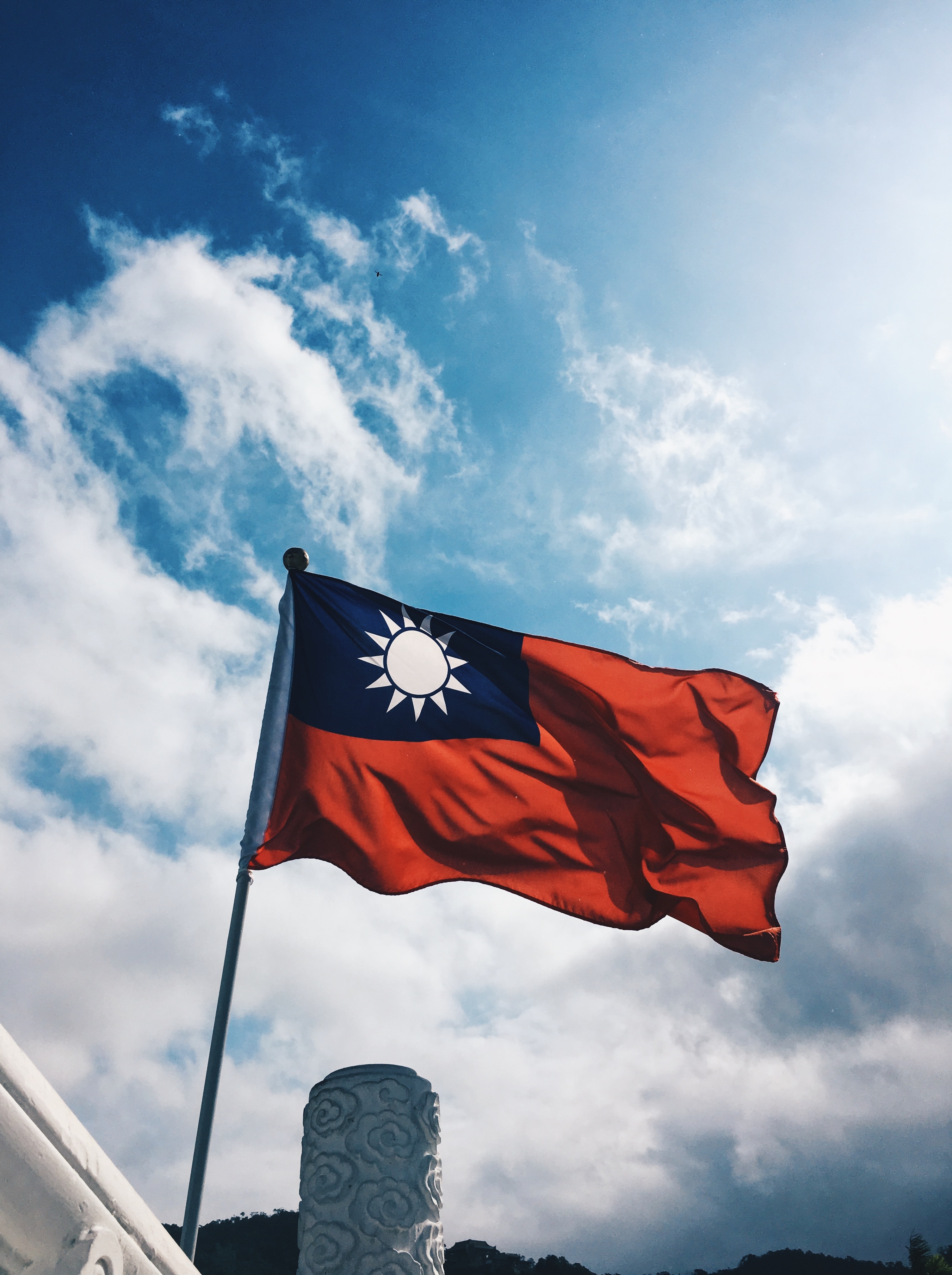 Why should Americans and the international community care about whether an island in East Asia is part of mainland China or not at a time when Americans are grappling with rising costs of everyday products from fuel to food, dealing with the constant impacts to supply chains from the COVID-19 pandemic, and worrying about whether their kids are getting the right education to be successful in a world that is becoming more interconnected and complex? We should care because all these issues will be made worse by a Chinese invasion of Taiwan. If the People’s Republic of China were to cross the Taiwan Strait to eliminate and subjugate the Taiwanese people, then Chinese President Xi Jinping would capture an additional 64% of the world’s manufacturing capacity of semiconductors -- the building blocks of the information revolution.

A China Taiwan invasion would impact the ability of Americans to get phones, computers, cars, and domestic appliances like refrigerators, this would affect the American economy’s role as the most important economy in the world, impacting the purchasing power of Americans, our retirement accounts, and our kids’ ability to get good paying jobs.

Chinese leaders have made it clear that the status quo on the Taiwan issue, or more specifically Taiwan independence, is not acceptable. China’s leaders have made it clear in recent years, since at least 2015, that they want to surpass the United States as the world’s great power. They have been executing a plan to achieve this goal by striving to be the world’s leader in several advanced technologies like 5G, artificial intelligence, and quantum computing. What all these things have in common is that they need a whole bunch of semiconductors to work.

In mid-October 2021, the Minister of Defense for Taiwan said that after years of military exercises and preparation that by 2025 Chinese military forces would be able to conduct a full-scale invasion to control Taiwan, and we might not be able to bring semiconductor manufacturing back to the U.S. within this time period.

If we are going to protect U.S. interests and prevent China from bullying the rest of the world and exporting its human rights abuses that we have seen against communities such as the Uyghurs and in places like Hong Kong, then we will have to do it in a way that will prevent the kind of brinksmanship we saw fifty-nine years ago during the Cuban Missile Crisis. The United States and President Biden will have to work double-time with our allies now to make the Chinese government understand the juice won’t be worth the squeeze. Otherwise, we better have a U.S. President that is calm, cool and with plenty of integrity who can deal with this quagmire in 2025 because this conflict is coming whether we like it or not.